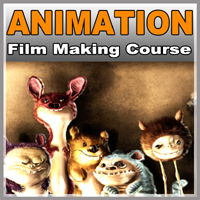 Courses offered in Animation Film Making in various animation and VFX Institution/Colleges in Odisha and other states in India entail the study of animation and its application to make motion non living things in frames of pictures. Coursework aims at introducing students to the various animation tools besides teaching to them the process of making the illusion of motion, an illusion of change by means of the rapid display of a sequence of images minimally differing from each other and introducing them to the phenomenon. Also, students are trained in the various ways of recording through analogue media, flip book, motion picture film, video tape and digital media including formats with animated GIF, Flash animation and digital video. Furthermore, students of Trytoon Academy are taught about the various animation creation methods such as the traditional method and the ones involving stop motion animation of two and three-dimensional objects, paper cutouts, puppets and clay figures. Our expertise teachers are taught how images get displayed in rapid succession and the number of frames coming out per second. Trtyoon Academy institute of Animation design are taught about 2D and 3D animation extensively and their use in making animation films.

There are plenty of jobs and placements for animation film making course available according to demand of current animation industries requirements with big production houses with them rolling out animation films and shows for television every now and in future.